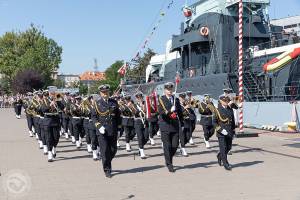 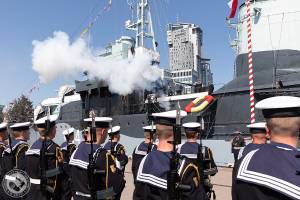 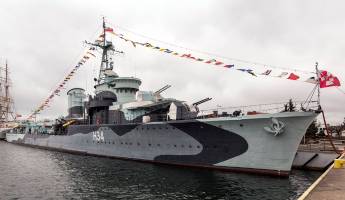 Even though a museum ship, she still flies the naval ensign as she is in service in the Polish navy and part of the 3rd Polish Naval Fleet, with her own crew! ORP Błyskawica is a precious national relic, the only remaining ship that was built before the World WAR II and the oldest destroyer existing in the world. Today the ship is also used for important meetings, official celebrations and many of Navy events, such as the promotion of navy officers.

Because of this the ship is not open to visitors on those days – please, always check our website first!

Two destroyers were built by the JS White firm based in Cowes on the Isle of Wight: the ORP Błyskawica (Lightning), and a sister ship, ORP Grom (Thunder). Measuring 114 metres in length, weighing 2,782 tonnes and powered by turbines rated at 54,000hp, they were to become the fastest destroyers in the world when launched in 1936. Heavily armed with the speed of 39 knots the two were to serve a dual purpose: both as fast surface attack vessels and submarine chasers.

ORP Błyskawica became the pride of the Polish Fleet, belonging to the most up to date and most powerful fighting ships in the world. Further destroyers of this class were to be built in Poland’s own shipyard – but the outbreak of war put an end to such plans.

As it happened they never did meet again. ORP Wicher was bombed and sank on the 3rd September 1939 in the port of Hel and ORP Grom share a similar fate whilst in a Norwegian fiord on the 4th May 1940.

ORP Błyskawica took part in many famous wartime operations of the Second World War. The Anglo-Polish Naval Agreement was signed In November 1939. The Polish Naval detachment, whilst being under the operational control of the British Admiralty, was commanded by Polish officers with Polish crews. The ships remained subject to Polish regulations and uniforms and rank distinctions, regarded as sovereign Polish territory.

ORP Błyskawica was active in the North Sea and the Atlantic Ocean. In the Spring of 1940, along with Grom, ORP Błyskawica entered the Norwegian Campaign (ORP Grom was bombed by a German aircraft on 4th May and sank with the loss of some 59 men). On the 28th May she took part in Operation Dynamo – the evacuation of the British Expeditionary Force from Dunkirk.

Later ORP Błyskawica was on convoy duties in the Atlantic and Mediterranean for two years.

At night of 4 May 1942, during bombing raid by the Luftwaffe with 160 bombers on Cowes, the ORP Błyskawica successfully defended the Isle of Wight town and the crew were hailed as the ‘saviours of Cowes’. These bombers could have easily decimated the area and killed hundreds, but the well- armed Polish Destroyer was in port. Around 70 people died in raids, but thanks to the heroic actions of the Błyskawica’s crew and the Polish Navy, town of Cowes was saved.

ORP Błyskawica provided cover during the Allied Normandy landings and at the end of the war, took part in Operation Deadlight – the destruction of the captured German U-boats.

She escorted 85 convoys, took part in 108 operational patrols, logging a distance of 138,356 nautical miles between 1939-1945. She engaged in combat throughout the war: damaging/sinking German 3 U-boats, shooting down at least 4 aircraft (and probably 3 more), and together with other Allied ships, sank 2 German destroyers, 2 ships and several other smaller German vessels as well successfully fighting German submarines.

In July 1947 she returned to Poland, which was now under a Communist imposed government, and remained on active service for another 20 years. In 1967, a serious propulsion unit accident occurred, killing several crew members. Since the restoration of the ship would have required replacing all her steam pipelines, she was converted into a coastal anti-aircraft defence ship. Finally ORP Błyskawica was retired from service in 1975.

It is the only ship to be awarded Poland’s highest military decoration, the Gold Cross of the Order of Virtuti Militari.

In May 1976 she became a museum ship, part of the Naval Museum in Gdynia – replacing the other WW2 veteran, the aging ORP Burza.