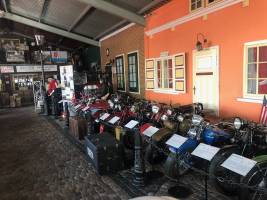 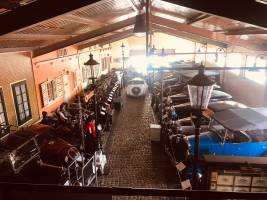 In a small space, the Gdynia Motor Museum holds a wealth of history and the authentic automotive spirit of the 20th century. This impressive collection of vintage cars and motorcycles includes such gems as:
Apart from cars and motorcycles, the Gdynia Motor Museum boasts a rich collection of archival documents such as engine diagrams, photographs from the most famous rallies, and old road maps, which can be viewed on the mezzanine, in a tastefully decorated vintage café. Make sure to note the design of the exhibition hall: a cobbled street from the 1920s complete with the facades of tenement houses. All the doors, windows, signs and decorations are genuine parts of interwar buildings from Gdynia and Gdańsk, and the historic colours of the facades have been meticulously recreated.

There are few places in Poland as well suited to presenting automotive history as Gdynia. At the turn of the 1920s, as black Ford Ts were rolling in large numbers off the conveyor belt in Detroit, the small village on the Baltic Sea was filling up with adventurous newcomers seeking a better life. In no time, the fishing village turned into Poland's window on the world, a large port city with modernist architecture and wide thoroughfares with modern limousines, buses and ubiquitous taxis driving up and down. It was on Gdynia's wharves that transports of new cars from around the world were unloaded before they were sent further into Poland.

Gdynia's first petrol station was launched as early as 1926. Car showrooms – Mercedes, Fiat and Chevrolet – popped up like mushrooms after the rain. Gdynia was the seat of the Ford representative office in Poland. Before the war the city had a hundred registered taxis and more cars per 10,000 residents than Warsaw. By the 1930s Kościuszki Square had become the scene of car rallies, whose tradition was later resurrected in the PRL period. In 1957, qualifying races for the Polish Automobile Championship attracted over 40,000 spectators. It is therefore no wonder that Gdynia, with such a rich tradition, is the perfect place for the Motor Museum.

Information for people with disabilities